Today I presented the case for a public transport service in Thames to the Thames Community Board.  View an abridged version of the presentation here.  I received a very receptive hearing from the Board members and District Councillors present.  It will now be up to the politicians to decide whether Thames will have a public transport service.  If you support the proposal then I would urge you to contact all of the board members, local councillors, and the mayor.  Their email addresses and phone numbers can be found on the Thames-Coromandel District Council website.

The proposal is for a 15 seater minibus hourly service commencing at 9 AM with six circuits of the town, the last at 2 PM – Monday to Friday.  The service is targeted at the elderly and others who do not have access to a vehicle.  The proposed route would commence at Bupa/Tararu, divert into Moanataiari, then into the CBD/Goldfields, past the hospital.  From there the service would go south down Pollen Street, then loop up into hill suburbs, down Brunton Crescent and out to Parawai/Booms/Bupa and back more directly through Banks Street and Rolleston Street to the CBD.

This route and the bus stops are not final and can be fine tuned. Don’t get too concerned about this detail – the important thing is whether you support a bus service in the town.

Public transport is a core service for the Council as much as roads, sewage, and libraries.  In the past the Council has ignored its responsibilities to provide this service, but hopefully this will now change.

Thames has some unique characteristics which make it ideal for a public transport service.

Large numbers of people in Thames do not have access to a vehicle. 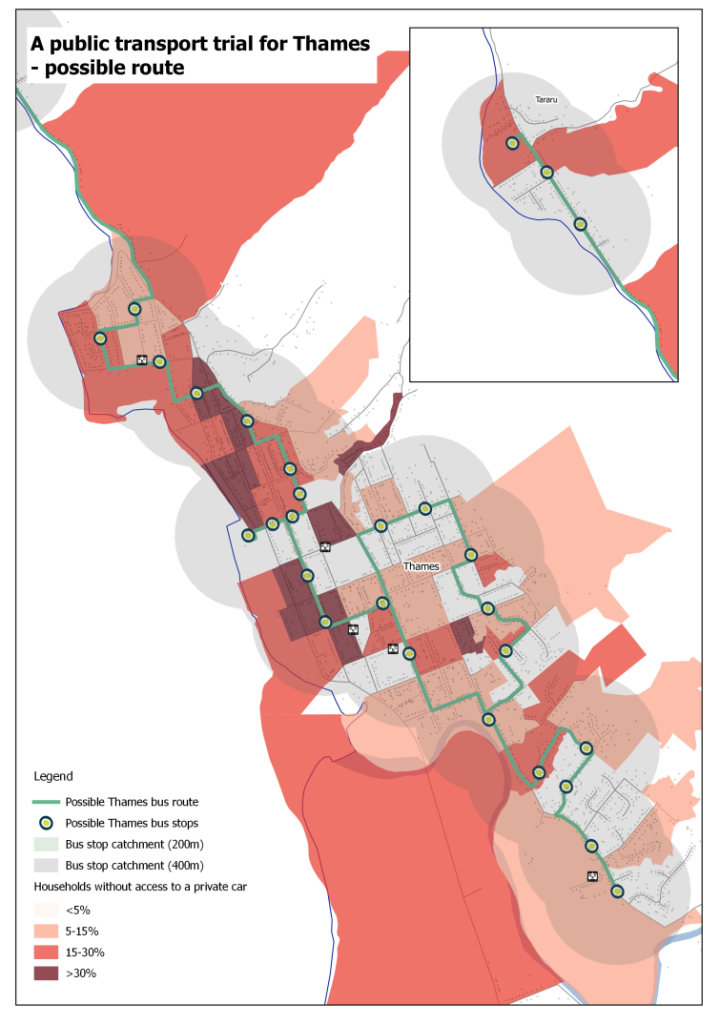 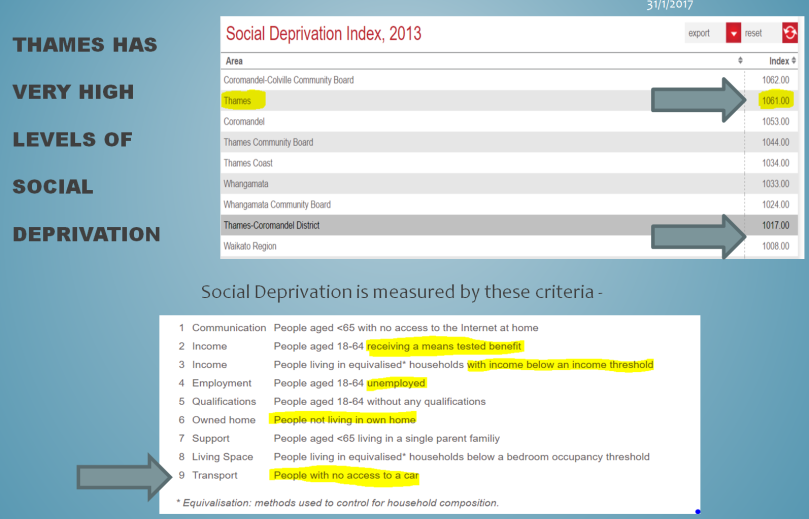 Thames is also the “oldest” town in New Zealand, with an average age of 51 years. The average for New Zealand as a whole is just 37 years.

Thames is also very “spread out”.  The distance from Tararu to Thames CBD is 3.6 km. That same distance is shown on this map of Hamilton. We don’t expect the elderly to walk or take a taxi in Hamilton – why should this be the case in Thames?

The proposal made to the Community Board was for an initial trial of six months.  This would cost approximately $39,000.  Once data is gathered on usage an application can then be made for ongoing New Zealand Transport Authority NZTA funding – 51%.  The yearly cost for the Council with the NZTA subsidy would be approximately $29,000. This sum could be reduced substantially if local businesses provided some sponsorship/advertising revenue.

Recent large Thames projects have mostly catered for those under age 55.  27% of the Thames population is aged over 65, so maybe it’s overdue for some projects which assist the growing  55+ segment of the population. The cost of a bus service is small when compared to these large projects, and it would assist people of all ages.

Apart from the standard NZTA funding there are other alternatives for funds.  For example, the Council could apply for an Energy Conservation Authority grant for a small electric bus service which would be able to use the existing electric charging facility behind the Thames library.

Another source of funds could be to make a special case to NZTA based on Thames’s unique aging demographics and other factors.  It will be 20 or 30 years before the rest of the country is as “old” as Thames is right now.  Thames is therefore a living “laboratory” for what the rest of the country will look like in terms of transport needs for the elderly. A strong case can be made for a fully funded trial and research project.

If you think Thames should have a public transport service you are going to have to ask for it loudly and strongly.  Please sign the petition, then share on all your networks.

Also please contact your local Board member or Councillor and the Mayor as soon as possible and make your views known. They will be deciding the future of the service in the next few weeks.

Also please comment on this blog – your contribution is welcome.

One thought on “The Case For Public Transport in Thames”