Thames town and the District, has a higher number of people aged 55 years and over, compared to the rest of the country.  The average age for the District is 51 years compared to 37 years nationwide, and 27% of the District’s population is aged over 65.  Most other parts of New Zealand will not be as “old” for another 20 or 30 years.

Some people I’ve spoken to regard the more aged local population as a problem.  But is it?  To the contrary, it can be a great opportunity if local businesses and politicians adopt the right attitudes and policies.

For businesses, this means recognising the enhanced skills, and experience of the aged who wish to remain in the workforce longer, and their spending powers as consumers.  For the District Council, it means coming up with more targeted policies and initiatives which actually help the aged and others who actually live and work here, rather than some fanciful theory that economic Nirvana rests with a more youthful population.  Hopefully, the approval by the Thames Community Board to fund a public transport trial in the Township is a sign of a change of attitude and is the first of many policies which look first to help those who actually live here.

Those who see the higher numbers of aged as a problem often repeat the mantra that “we need to attract more young people to the town to ensure that there is economic growth”.  But where is the hard evidence for this, and is it realistic to attempt to hold back the tide of a rapidly aging population in any event?

Strong evidence is emerging that age-friendly firms will not only retain the workers they have, but will develop reputations as companies that value experienced staff and are good places for those in their 60s, or even older, to work. A recent study showed that although almost 60 percent of workers said they’d like to retire by 65, only 45 percent thought they would be able to. That means we can expect more workers aged 65 and over still in the workforce in the coming years.

Massey University’s, Professor Tim Bentley, who was one of the co-authors of AUT’s Aging Work Force study, warns businesses who think people in their 60s are no longer of any use that they are out of date. He says the change in the age profile of workers means there could be a looming shortage of skills and a fierce battle for talent approaching.

The New Zealand Diversity Survey revealed that 68 percent of companies had no programs or policies in place to deal with the aging workforce.

PWC’s Golden Age Index confirms that older workers are critical to boosting economic output.  The report also noted that the traditional view that older workers blocked younger employees from rising should not be the case. People working longer will have more income to spend. This extra spending will produce more demand for labour to produce more goods and services.

The Business of Ageing report estimates that the mature consumer market will spend about $65 billion in 2051—a rise from about $16 billion per year currently. Thus the total number of jobs in the economy should rise to match the increase in labour demand.

Other social and economic opportunities arise from a more elderly population.  The elderly are keen participants in the volunteer sector in their communities. 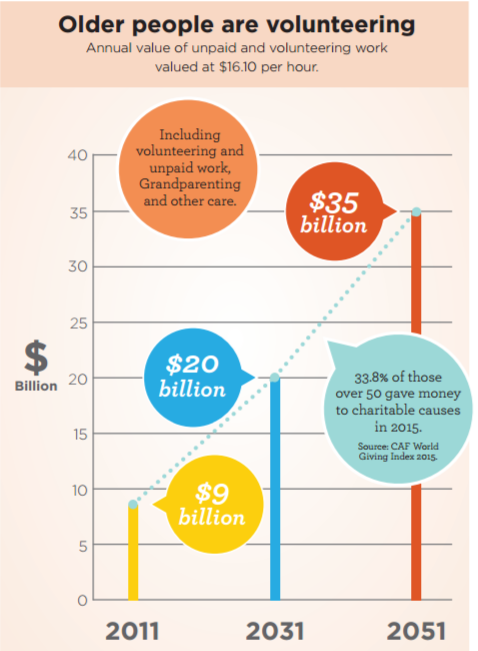 It is often overlooked that the elderly continue to be consumers and make a significant contribution to local economies.

Only a few local businesses such as the Thames Cinema and Noel Leeming offer a Super Gold Card discount ( only if you ask Noel Leeming for it).  Taking account of local demographics and the consumer spending power of about a third of the local population who are seniors I find this rather surprising?