Who should pay over $1 million to attempt to protect a few east coast beaches from coastal erosion?  A narrowly focused debate is presently underway in Council as to whether just Mercury Bay or all District ratepayers should pay. Deplorably, this debate is taking place in an information and policy vacuum. If you want to request that the Council sets up community engagement/information meetings on coastal hazards and climate change in your town – see below for email addresses.

First, is the plan really about protecting the beaches?  The community engagement to achieve mass planting and the move away from “hard” structures is laudable.   But is the unspoken purpose really an attempt to capture public funds to try to protect privately-owned homes unwisely built on or near the sand dunes?  And does the plan have any realistic hope of even medium-term success when factoring in just conservative projections for sea level rise, or is the plan a futile waste of money?  Has the plan been peer-reviewed by independent climate change experts and has any cost-benefit analysis been done?   The plan makes only a passing reference to sea level rise impacts.  Has the option of letting the beaches naturally migrate inland been seriously considered?

Second, the Regional and District Councils have failed to identify all coastal hazards on the Peninsula, including by inundation due to sea level rise.  This is legally required by Government directive.

Third, there is no coherent policy to inform residents or the Councils themselves about many of these hazards, or to determine when District-wide ratepayer funds should be spent.

Fourth, no has consideration been given how potentially massive future costs will be funded or even afforded when erosion and inundation flooding occurs around much of the Coromandel coastline.  The Mercury Bay decision will set a hugely important precedent.

This piecemeal half-baked approach is not only reckless; it is in breach of the Government’s 2010 National Coastal Policy Statement (NCPS).  The NCPS requires District and Regional Plans to identify all coastal hazards, including inundation by sea level rise over a 100-year timeframe “as soon as practicable,” and to restrict use and development, and consider “managed retreat” as an option within such areas.  (See in particular Policies 24 and 25.)  These are not issues which can be left for some future Council to deal with.  Legally the Councils are required to do this work now.

In seven years the only climate- change-related coastal hazards our District and Regional Councils have managed to identify and map as required by the NCPS are setback lines for coastal erosion in a few east coast locations. Hazard zones around all of the Peninsula relating to inundation due to sea level rise have not been identified, even although the ideal opportunity arose when the District Plan was recently reviewed.  A District Council Hearings Panel Report on Coastal hazards agreed that “natural hazard rules do not yet address coastal inundation (except in Thames)  despite it being a major hazard in the future for many coastal areas.”
This graphic sums up the situation:- 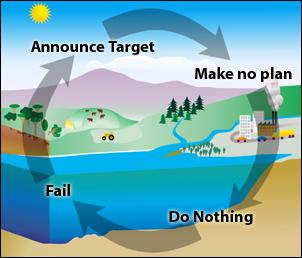 Other Councils such as Northland, (with 14,000 coastal properties at risk from coastal hazards), Dunedin, and Christchurch have already mapped hazard zones for BOTH erosion AND inundation due to sea level rise.  Comprehensive reports eg. in Hawkes Bay  and Dunedin – also here (2010) have been prepared.  In some areas the public has been widely consulted, information is available on LIM Reports and they can plan land sales and purchases and development proposals accordingly.  Meanwhile, many of our residents who are equally if not more at risk as people in these other regions have been kept in the dark about these matters.

This map from Paihia in Northland, for example, shows both coastal erosion setbacks (orange and pink lines) as well as coastal inundation flood areas projected for 2065 and 2115. ( light green and dark green areas). 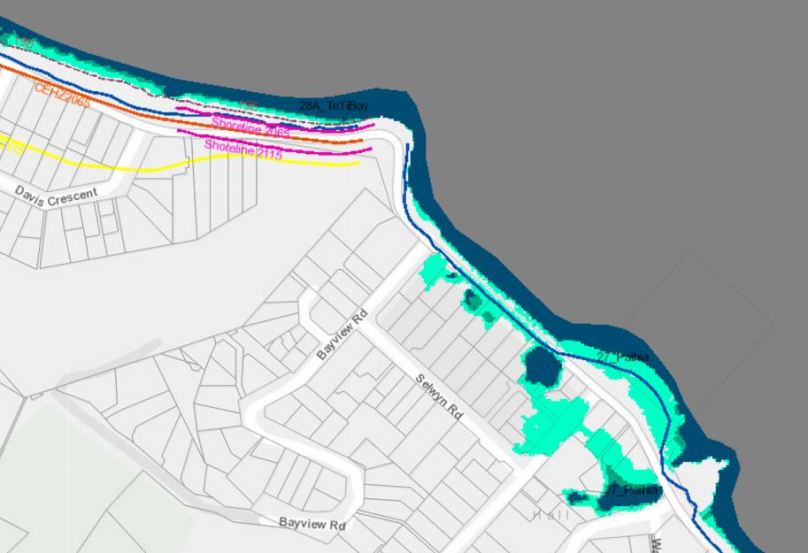 It’s reckless to delay because the adverse effects of climate change are already upon us – whether it be coastal erosion, storm surges or severe floods.  Ice sheets at both poles are melting faster than was predicted only 7 years ago.  In tandem with this melting trend predictions for sea level rise are also much higher than those which underpin the 2010 assumptions in the NCPS (1m sea level rise by 2100).  7 years ago in 2010 the author of the Dunedin report was pointing out that “more recent research suggests a value of +1.6 m (of sea level rise by 2100) would be more prudent.”

The latest (January 2017) “extreme” prediction from the US National Oceanic and Atmospheric Administration (NOAA) is now 2.5 M of sea level rise by 2100 –  a staggering 1.5 M higher than projections made less than a decade ago. Mid-range projections have levels .5M higher by 2060 – just 43 years away.

Sea level rise hazards are not restricted to Mercury Bay.  Many of the low-lying urban areas on the Peninsula at risk from sea level rise are on the west coast.  Thames, Thames Coast and around Coromandel have quite large areas which are less than half a metre above sea level.  Most of Thames west of Pollen Street and south of Grey Street in Shortland is less than 1.0 M above sea level. See the local maps from the Parliamentary Commissioner For The Environment’s Report – “Preparing New Zealand for rising seas: Certainty and Uncertainty”  November 2015.

Crucial road links into Thames and its sewage plant and airfield are in areas at risk from coastal inundation.  Most of the Hauraki Plains stretching south of Ngatea is less than half a metre above sea level.  What plans have the Councils made to retain absolutely critical road links from the Peninsula to Auckland, Hamilton and Tauranga or around the Peninsula itself?  What contingency plans have been made, other than in the Coromandel harbour, for alternative wharf/ferry/port infrastructure to keep open sea links to Auckland?  As the Dunedin study says – “many of the City’s plans, are likely to extend well into the 50–100 year timeframe… it is prudent to factor in such impacts. For example, dealing with new estimates of climate and sea level extremes at the design stage is far more cost-effective than trying to retrofit measures once infrastructure has already been built”

The essential policy framework to decide which assets should be protected has not been done.   Should private coastal landowners realistically expect public effort and money to protect their private assets? Apart from occasional small Mayoral funds, and Government assistance after catastrophic disasters, private owners are currently left to fend for themselves when rivers flood or earthquakes wreck their homes.  Why should coastal flooding be treated differently?  Australian owned insurance companies have already made it clear they will not cover “gradual” damage caused by coastal hazards, so why should ratepayers have to bear this cost?   Should only public assets such as roads and other vital infrastructure be viable for protection or relocation?  Will limited funds mean only public assets of regional or national significance will be protected?  Before any decision is made on the Mercury Bay beach protection proposals, surely this policy framework must first be thrashed out.

It’s time for both Councils to end the foot-dragging and evasion of their legal obligations and get these Peninsula-wide inundation zones and all other hazard zones identified and mapped, and to decide on equitable and climate-change-realistic policies for funding and intervention. If this means an immediate Variation of Regional and District Plans – then so be it.  And they need to start urgent contingency planning to protect vital public infrastructure from these hazards.