My previous blog highlighted haphazard Council planning around identifying all coastal hazards, and the lack of public consultation and engagement.

Fortunately, we don’t have to reinvent the wheel about public consultation and engagement on climate change adaption and sea level rise.  There is a good blueprint from 2010 in Whitianga.  NIWA held an Open Day followed by a Workshop for Whitianga residents about changes to the coastline under climate change, and how they might adapt.  Unfortunately, with the election of a new Mayor and Council in late 2010 all this great momentum was lost, and no further similar meetings have occurred.

If you agree that the time is well overdue for YOUR Peninsula community to be consulted about coastal hazards and climate change – then take action and email all or any of :-

The Whitianga team included scientists (NIWA, Waikato Regional Council), social scientists (AgResearch), educationalists (University of Waikato), and managers with resource management and local government experience (WRC and TCDC).   A team of 12 people were involved in the Open Day which was widely advertised in the local media.

When visitors arrived they passed through an information tunnel with historical and current pictures and information about the coast.

Inside six tables were laid out with two team members assigned to it and a box of pins with flags (paper labels) attached, on which participants could record their thoughts and then pin them on the maps.  Team members on each table were able to explain the projections of flooding, erosion and habitat change illustrated on the map, and answer any climate change related questions on a one-on-one basis with participants.   Additional comments could be made in a book on the table.

Separate maps were provided to illustrate:

Sea Flooding ; two situations were mapped. The first was for sea flooding on a current spring high tide. The second was for a larger sea flooding and a 1-in-100 year storm,  – ‘major cyclone’ or storm tide. 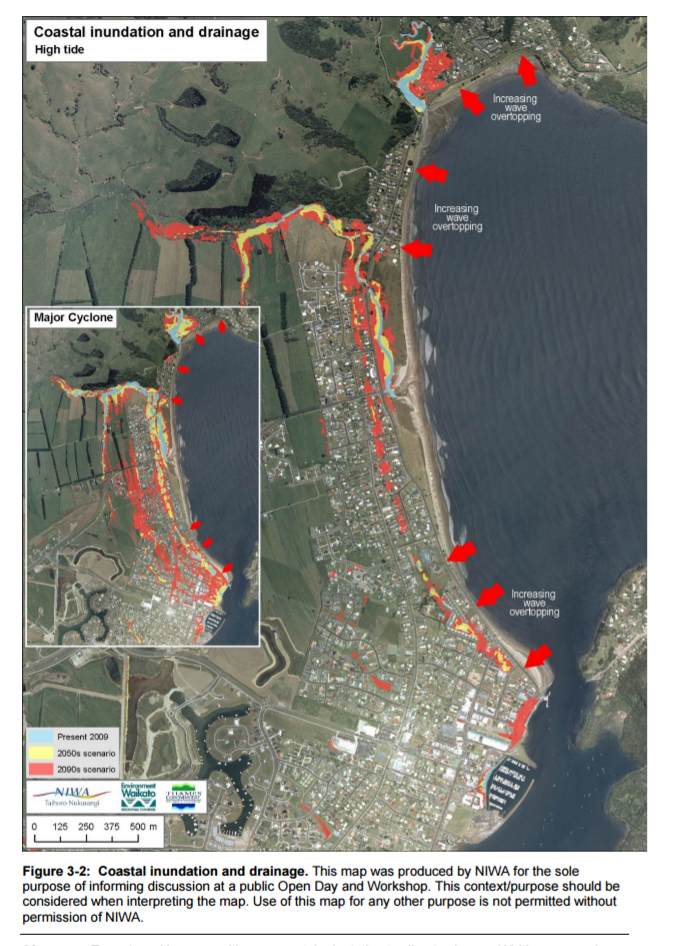 NOTE: Separate maps for both sea flooding and erosion hazards were produced – which is what is legally required of TCDC for the whole Peninsula.

Participants reported that they appreciated the opportunity to ask the scientists questions about coastal hazards, and climate change

Regional and District Council involvement in the day was invaluable as it gave the public confidence that their thoughts were being heard and this wasn’t just another dead end data gathering exercise.

For the Councils, it was a chance to have a different sort of conversation with the community, because in this environment Council staff were not seen as driving the process.

As a follow-up to the Open Day and Workshop, a public meeting was held to report back the initial findings to the Whitianga community.

In a separate strand of work students and teachers from Mercury Bay Area School successfully collaborated with the developing a teaching and learning programme on climate change adaption.  This was taught to a mixed ability Year 10 class for a 7-week period and averaged 14 hours per week spread over Science, Mathematics, English and Social Studies timetabled classes (approximately 100 hours in total), and Science occupied 28 hours of teaching time over a 6 week period. See:- Mercury Bay School NIWA Project Report

Conclusion – A Useful Start to Dialogue

Note:  A similar exercise was undertaken by NIWA with local iwi at Manaia on the west coast of the Peninsula.