Not a Big Surf Break at Whitianga.

In recent blogs on the latest Ministry for the Environment Guidelines on climate change and sea-level rise and on the proposed extension of the Whitianga Waterways project I used the Waikato Regional Council coastal inundation tool.  The tool is very useful in illustrating the potential flooding effect of sea level rise on coastal communities around the Peninsula.

During a severe storm, particularly when strong winds are blowing onshore, an effect called wave set-up can be created.  This wave set-up level increases the risk for coastal communities. 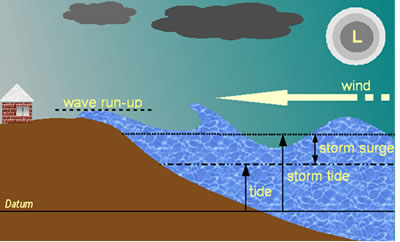 The previous maps of Whitianga produced from the inundation tool did not include wave effects because the extent of wave set-up was not known on the Whitianga foreshore.  However, it turns out the coastal engineering firm of Tonkin and Taylor have done this modelling for Whitianga and have concluded that the wave set-up level is 0.6 m.

Tonkin and Taylor prepared an Engineering Design Statement for the proposed extension to the sea wall at Buffalo Beach. The statement has been presented to Thames Coromandel District Council in support of the resource consent application for the seawall. At paragraph 1.4 of the Statement, there is a discussion of wave setups.

“Waves can both super-elevate the mean water level during the breaking process (termed wave set up) and cause impulsive damage due to wave runup……. Numerical wave transformation modelling has been undertaken to determine likely wave conditions offshore of Whitianga Beach that may elevate water levels due to wave setup”. SWAN (Simulating WAves Nearshore) is a third-generation wave model that computes random, short-crested wind- generated waves in coastal regions and inland waters”

“Winds and waves from the north to south-east were tested with conditions from the easterly direction found to result in largest waves conditions at Buffalo Beach.”

The conclusion drawn by the Engineers is that an estimated wave set-up at Whitianga Beach is 0.6 m.  Their report included the following diagram:- 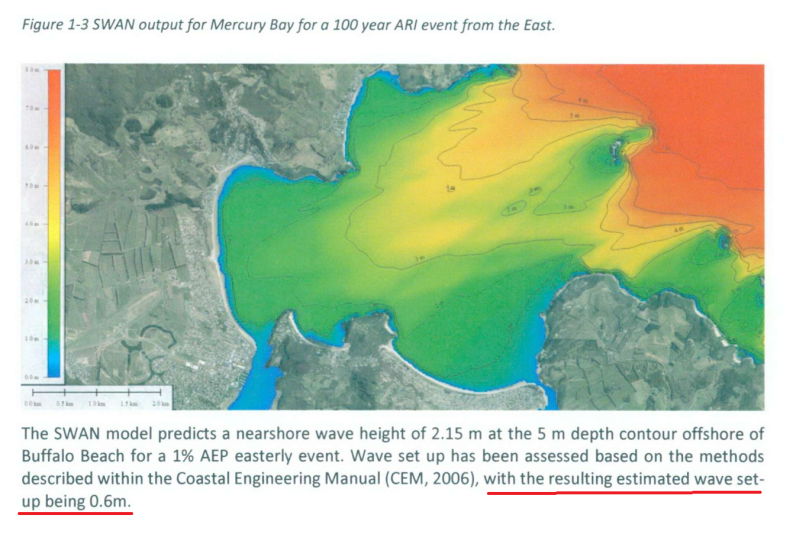 With this new wave set up modelling available, it is now possible to include all three factors, including wave set-up when assessing potential sea flooding risk for Whitianga.

If the effect of a maximum storm tide (1.99m – taken from the WRC’s pre-defined storm tide level) and wave setup (0.60m) is included, plus 1.9m of sea level rise as per the Ministry for the Environment Guidelines stress test for “greenfield” development, a total of  4.49m is indicated.

This results in the following extent of inundation on the WRC inundation tool:- 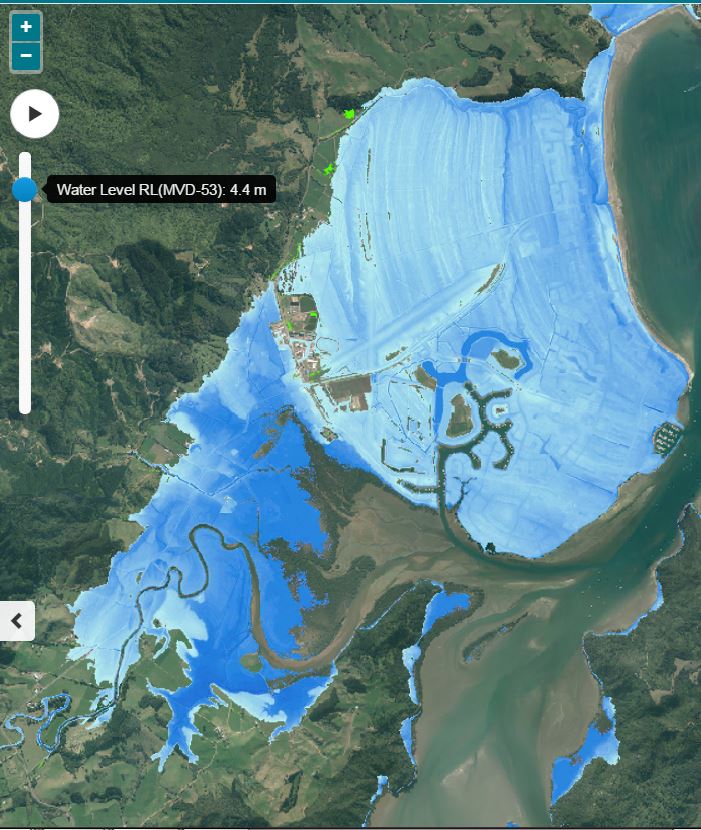 It is noteworthy that the Tonkin and Taylor engineering design statement contains a “design water level” for the Buffalo Beach seawall which includes storm tide levels, plus wave set-up level, plus projected sea level rise.

It makes good sense therefore that projects such as the Waterways extension subdivision and other “greenfields” developments and new infrastructure should be similarly assessed against these same three combinations of factors.  It also highlights why there is an urgent need for Waikato Regional Council and TCDC to do site-specific modelling of wave set-up and all other sea flooding issues.