High-End Outcomes of Sea Level Rise For Whitianga Waterways Subdivision Have Been Ignored?

The Thames-Coromandel District Council recently gave its consent to a 72 lot extension of the Whitianga Waterways canal housing project, and relied on a “least drama” IPCC projection for sea level rise of 1.06 m out to 2120.  That 1m projection complies with nine-year-old 2008 Ministry for the Environment guidelines.  But was this good resource and risk management practice?  If the Council had instead taken account of high-impact but relatively low-probability projections, as has been proposed by the latest 2017 Draft Ministry guidelines and other 2017 reports from the USA, it would have been forced to conclude that both the subdivision itself and most of Whitianga township will be submerged by rising seas.  Put another way, has this subdivision managed to get Council consent courtesy of the National Government’s failure to update the Ministry guidelines in the last 9 years, and its suppression of the Ministry Report before the 2017 election? More importantly, is the subdivision safe?

In mid-June, I wrote to the Thames-Coromandel District Council querying why no expert coastal hazard expert advice had been required from the applicant.  None of the documents lodged in support of the application made any reference to potential sea level rise or other climate change-related issues.  I wrote about this issue here.  I drew the attention of the Council to the latest Draft Ministry guidelines which require a “stress test” for greenfield coastal subdivision of a sea level rise of at least 1.9 m, and consideration of a timeline out to at least 2150.  I also pointed out the conclusions in the latest 2017 US NOAA and California Coastal Commission reports which both recommend that the more “extreme” high-impact but relatively low probability projections should be considered when assessing new coastal greenfield development.  Both of those reports also say that a sea level rise of 2.5 m by 2100 is “plausible” and should be considered for a development such as the Waterways project.  I pointed out that both of these USA reports qualified as the “best available information” and were required to be considered by virtue of Policy 24 in the New Zealand Coastal Policy Statement.

The Council did belatedly request the applicant to provide a coastal sea level rise assessment and a Coastal Inundation Report was received from the applicant’s consultants’ Tonkin and Taylor on 26 July 2017.  The Tonkin and Taylor ignored the 2017 draft Ministry guidelines, and the requirement to consider the “best available information” in the latest US reports. They relied solely on the 2008 Guidelines and the 2015 IPCC Report.   The Council accepted the consultant’s reports without question. Also of great concern, is why the Council had not asked for this report when it first received the resource consent application, and why initially it was willing to process the application without any sea level or climate change related expert reports.  The answer seems clear – there is a systemic failure in the way that the Council processes these coastal applications.

The Tonkin and Taylor Report considers various sea level rise scenarios based on the 2015 IPCC assessments. The sea level rise projection for 2120 under Scenario RCP8.5M is 1.06m and under the RCP 83rd % Scenario the projected sea level rises 1.36 m. – see this table :-

In the assessment conclusion to its report, Tonkin and Taylor refers to the IPCC (2015) Report and the Ministry for the Environment 2008 guidelines on climate change and sea level rise.  Tonkin and Taylor go on to recommend the significantly more conservative RCP8.5m projection of 1.06 m rather than the RCP 83rd% Scenario of 1.36 m – see the following table:-

Using the conservative projections used by Tonkin and Taylor, they conclude that the final ground level in the subdivision will be “at least 0.45 m higher than the revised flood level”.  Half a meter of freeboard could end up being a disastrous miscalculation, should the lower probability but high-impact projections of sea level rise come to pass.

For example, the latest Draft Ministry guidelines require consideration of an additional 0.9 m above the level used by Tonkin and Taylor, and if the latest low probability projections from the USA became a reality (2.5 m by 2100) it would mean they have underestimated the level of sea level rise by 1.5 m.  None of these reports were considered.

There is a growing body of research which concludes that the IPCC significantly underestimates the risks of climate change and sea level rise and that current decision-making fails to answer the fundamental question “what is safe?”

P.23 – Such failures are manifested in two ways in climate policy. At the political, bureaucratic and business levels in the underplaying of the high-end risks and in failing to recognise that the existential risks of climate change is totally different from other risk categories. And at the research level, as embodied in IPCC reports, in underestimating climate change impacts, along with an under-emphasis on, and poor communication of, the high-end risks. The IPCC reports have not provided a sufficient evidentiary base to answer a key question for normative policymaking: what would be safe?

Climate policymaking at all levels of government use the reports of the IPCC as the primary physical science basis. The failure of the IPCC to report in a balanced manner the full range of risks and to fully account for high-end outcomes leaves policymakers ill-informed and undermines the capacity of governments and communities to make the correct decisions to protect their well-being, or indeed to protect human civilisation as a whole, in the face of existential risks.

The Big Picture – The Water Elephant in the Room

There is an even more fundamental issue which has not been addressed by the applicant or the Council.  What is the point of creating a new subdivision and inviting people to spend upwards of $1 million for land and a new house in a town which would be largely submerged from the sea, and where access via the State Highway is likely to be also submerged?

As can be seen from the following Waikato Regional Council inundation map, whilst the Waterways subdivision extension may itself be “dry” at the flood level used by Tonkin and Taylor in their report, much of the town and the entranceway would be submerged.  Where would the owners of these new waterways properties shop, or access medical and other essential services and amenities, if much of the town that is meant to attract these new owners as a place to live and work, is submerged in coming decades? (12.63 m shown in Table 3 above uses the WWD datum which equates to 2.6m – MV53 datum in the Regional Council inundation tool – see comparative table in the footnote.) 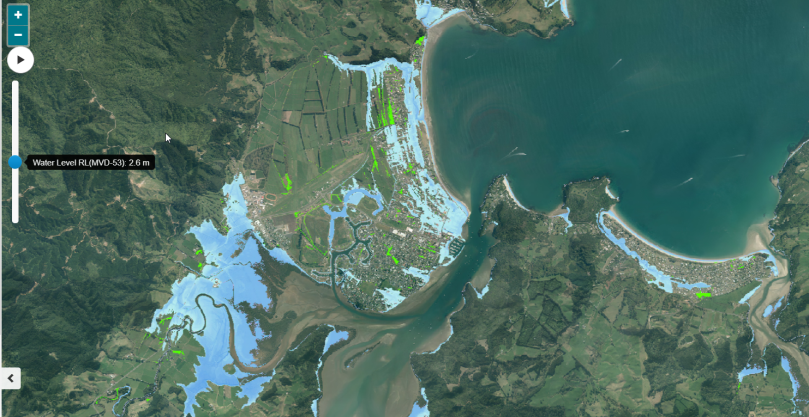 If 0.9m is added to the 1.0m sea level rise used by Tonkin and Taylor, then to meet the 1.9m “stress test” required by the new draft 2017 Ministry guidelines the inundation levels for Whitianga look like this:– 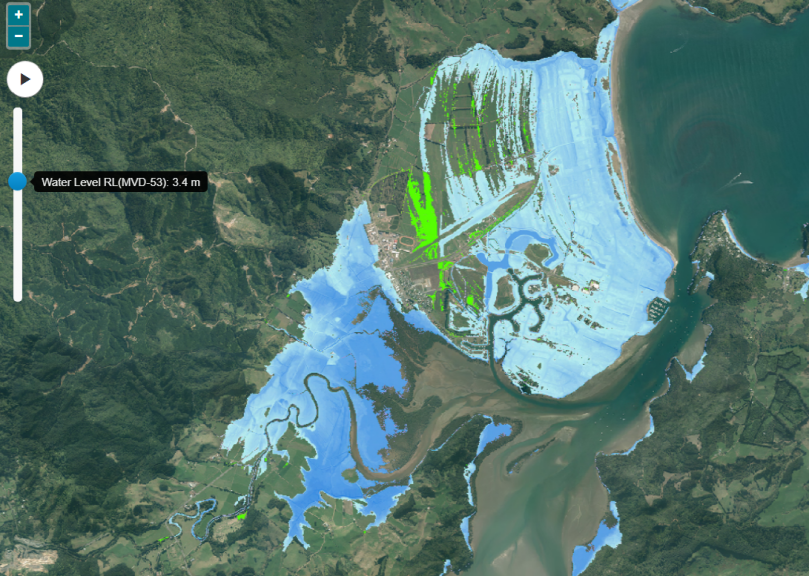 These maps show storm tide scenarios, which are not a permanent state of affairs.  But the Parliamentary Commissioner for the Environment has reported that a 1m sea level rise will result in a current 1-in-100-year extreme event becoming a DAILY event.  Same difference?

Council Liability? ( That Means You and I )

The Council has already exposed itself to legal liability by granting a resource consent to the subdivision.  Granting building consents to new houses will only add to the possibility that disgruntled property owners will sue the Council at some point in the future, should their land/houses and canal walls begin to be inundated by rising seas.  The Council cannot say that they were not warned – they were – repeatedly.  And it won’t just be landowners who will be angry.  Ratepayers and taxpayers who are asked to dig deep into their pockets to cover the completely avoidable costs of relocating these holiday homeowners are going to be furious.