There has been justifiable outrage from Forest and Bird and other environmental groups that new conservation land areas in the South Island had been opened up to prospecting.  The groups ask how can this happen when the new government has announced it will bring in a ban on mining on conservation land?  What is the point of applying for a new prospecting license when there is no prospect of obtaining a mining license due to the promised ban?

Maybe the “pot of gold” that these mining companies are seeking is not to be found in the ground, but rather by seeking compensation from the government for not being able to convert a prospecting license into a mining license.  On past experience from when Schedule 4 was first introduced in the 1990’s, this strategy should fail.

There is an automatic right in the Crown Minerals Act to upgrade from one type of permit to a more extensive one.  But as Jamie Morton’s article in the New Zealand Herald correctly points out, to obtain a mining permit an access agreement is required from the landowner – which in the case of conservation land means the Minister of Conservation (and the Minister of Energy under the current law).  In addition, a mining company will need a resource consent.

Can a Mining Company Expect Compensation?

However, what has been missing from the discussion so far is whether a mining company which holds a prospecting or exploration license is entitled to compensation when the proposed ban on mining is introduced.

The issue of compensation in this context has arisen before. In the late 1990s, the then National Government passed the Crown Minerals Act and the much talked about Schedule 4 which defined those areas of conservation land where mining was prohibited.  Yes – it was the Bolger National Government which introduced Schedule 4.

When the Crown Minerals Act was being debated one of the issues which arose was whether mining companies were entitled to any compensation for no longer being able to get an access agreement to mine.  At that time, the Coromandel Peninsula was littered with prospecting/exploration licenses including over much of the conservation estate to which the ban applied (north of the Kopu Hikuia Road).

No compensation was paid to any mining company as a result of Schedule 4 being introduced.  The very clear position taken by the government was that this was Crown land, the Parliament has sovereign rights, and can make unchallengeable changes to New Zealand laws.

The key question, therefore, is whether the current government will follow that precedent set back in the 1990s by a previous National Government?

In the meantime, the Minister of Energy should read the riot act to NZ Petroleum and Minerals (NZPAM) and make it clear that no new permits will ever be given an upgrade right.  Next, she should purge NZPAM of all those officials who have been captured by the mining industry and replace them all with people who will carry out the new government’s policies.

All of the media coverage in recent weeks has missed one key fact. It has been Labour Party policy set out clearly in its election manifestos in 2014 and 2017 that Labour will commit to add ecological and world heritage areas and to extend Schedule 4 on the Coromandel Peninsula southwards from the Kopu Hikuia to the southern boundary of the Te Aroha Ecological District to include all conservation land within that extended area.  There are other proposals to tighten up the law around Schedule 4.

Here are the relevant sections from Labour’s 2014 and 2017 policy manifestos. 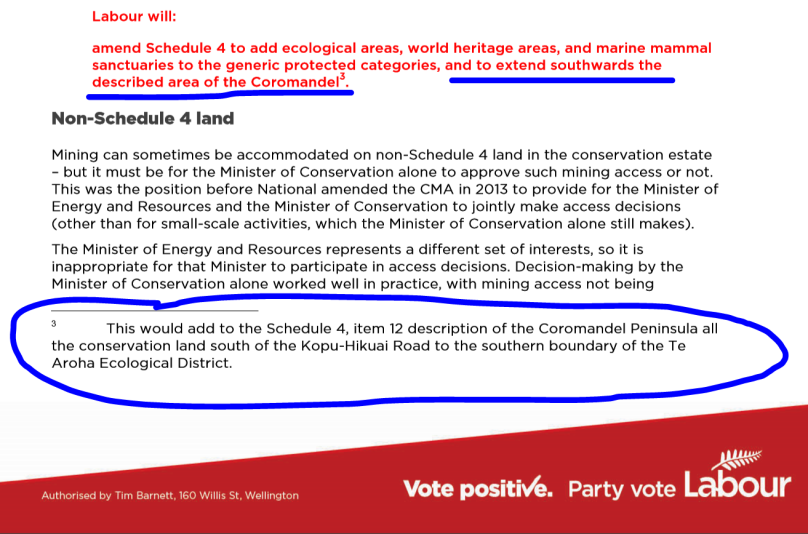 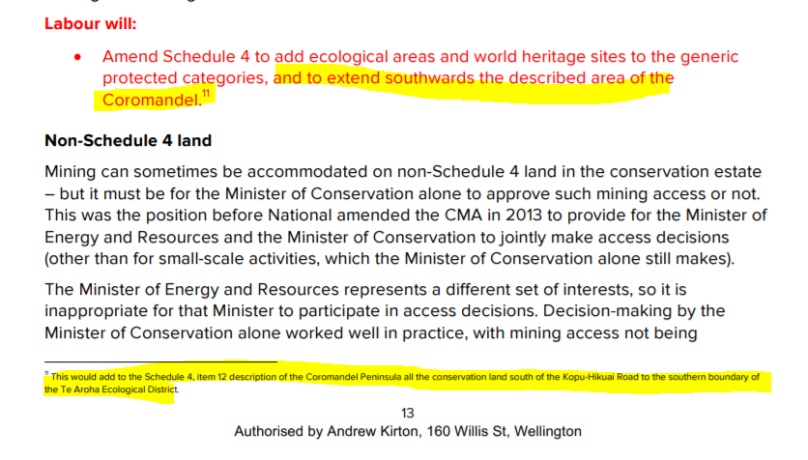 The Greens have a policy for an even wider extension of Schedule 4. 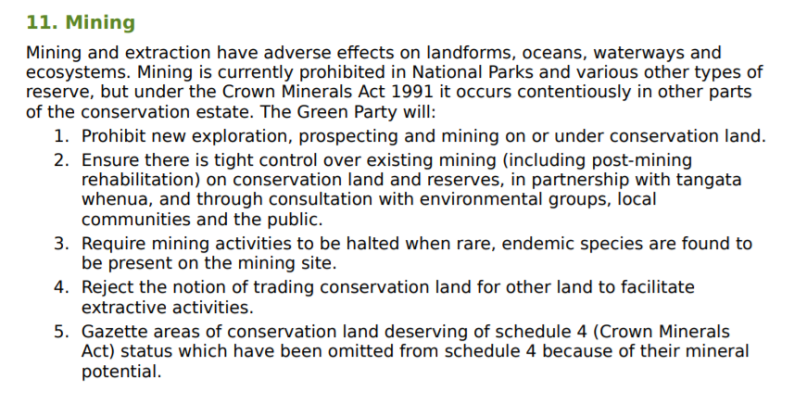 No one should be surprised, therefore (at least in respect of the Coromandel area) when the commitment was made by the Prime Minister in her speech to the throne in November 2017, to bring in a ban on mining of conservation land.  40,000 people marched up Queen Street in 2010 (including the PM) when the previous National Government tried to open up the Coromandel and other conservation land to mining.

The very first Private Members Bill introduced by Jacinda Ardern as a new member of Parliament in 2010 was to ensure greater protection for Schedule 4 land.

Finally here is a New Zealand Herald editorial which is strongly in favour of a ban on mining conservation land.  Lordy, how the times are a-changing….