Anyone who reads TeggTalk will know that I have been pounding these issues for over a year, so it was great to see many of the same topics being covered so extensively by one of New Zealand’s pre-eminent environmental journalists.

If you didn’t see the article in the Hauraki Herald you can read it, complete with links and additional photos here

Please share it widely on social media and other networks.

The key question Charlie Mitchell addresses is – how well is the Thames-Coromandel District Council responding to climate change and sealevel rise issues?  The answer – it’s a mixed bag.

On the one hand, TCDC has made a good start in addressing coastal hazard issues by hiring coastal engineer Jan Van der Vliet and seemingly making a decision to follow the Hawkes Bay experience and develop Shoreline Management Plans. 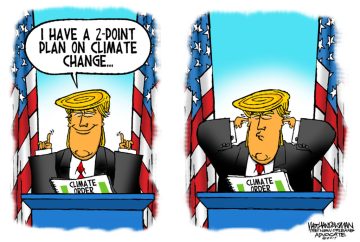 But in a disturbing revelation, the Stuff article reveals that senior management in TCDC actively removed reference to “climate change” in an official document relating to the proposed new swimming pool near Thames.  We expect this sort of deplorable climate science denial from Donald Trump.  But it’s a real shock to see this anti-science head in the sand attitude at the top level of management of TCDC (and likely also in some of our politicians?)

This Trump-like behaviour goes a long way to explaining why – unlike dozens of other councils, TCDC does not have an emissions reduction (mitigation) strategy for its own activities.  Also, the Council has failed to sign the Local Government New Zealand Climate Leaders Declaration on climate change mitigation.  Close to 50 other councils have signed, including Hauraki District and Waikato Regional Council, but not TCDC.

The other bad news is that where the rubber hits the road at the resource consent level, TCDC continues to consent major new risky coastal projects without sufficient attention to both the New Zealand Coastal Policy Statement and the latest Government Guidance on coastal hazards.  A particularly egregious example of this is the resource consent TCDC granted for the Richmond Villas apartment block on the foreshore of Thames.  (More on that later)

This is also the case in respect of the Council’s own projects such as the proposed swimming pool near Thames, the Whitianga town centre upgrade project,  and for its promotion of an improved landing site and marine service industry at Kopu.

Overall a pass mark on coastal hazard adaptation, but a D- for risky coastal resource consent applications, the Council’s own projects and climate change mitigation efforts.