Recently, Waikato Regional Council briefed the Hauraki District Council, and here are some of the slides from that presentation –

Tide levels are different around the region so it is important to use the pre-defined water levels for the area you are looking at.  For the Hauraki Plains the “Firth of Thames” levels should be used.

The simulator shows both direct inundation (blue areas) and areas with no direct flow path to the sea — eg. via groundwater (green areas)

In a new feature flood maps will assume that over-topping and flooding will only occur when stopbank design crest levels are reached.  But remember do stopbanks fail eg. Egdecombe 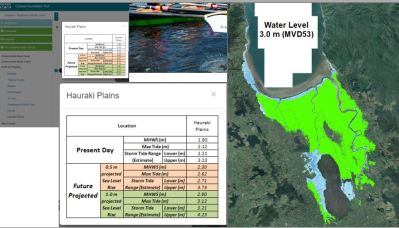