Thames-Coromandel councillors were briefed last week on the coastal hazard work planned around the Peninsula in the next two or three years.  The Council has engaged a Netherlands-based consulting firm called Royal HaskoningDHV to lead this shoreline management planning work which will assess the risks from climate change and sea level rise, and develop adaptation plans.

This work is not optional – all councils in New Zealand are legally required to identify coastal hazards under the Resource Management Act and the New Zealand Coastal Policy Statement 2010.  They must then develop adaptation plans for climate change and sea level rise as set out in the government’s Coastal Hazard Guidance which TCDC has adopted. 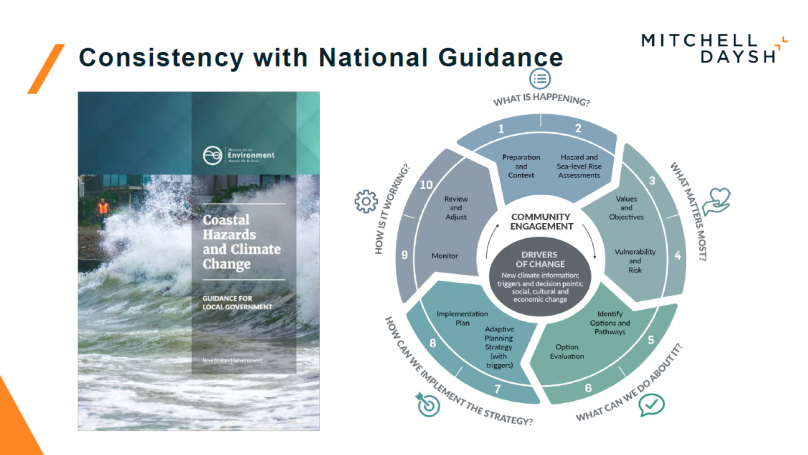 It’s great to see this work finally underway.  TCDC is at least five years behind many other councils, but better late than never.  So lets put an end to this nonsense from the Mayor that TCDC is a “leader” on climate change.

At the Council workshop councillors were given 2 presentations which you can link to here, and here  They also received a report from the Council’s former coastal engineer (who has now resigned and has yet to be replaced)

The first phase will be to assess risk and decide on priority areas which are most at risk from coastal hazards.

A strong emphasis on community engagement is proposed throughout this whole process.  It has to be hoped that this will actually materialise and will be meaningful.  The old way of doing things with daytime meetings which can only be attended by retirees must be tossed out.  There has to be proper engagement with all sectors of our communities including iwi, youth, workers with young families, the disadvantaged, and other community stakeholders. Council will have to go to the places where people are, rather than expect them to come to it.

There is a great deal of emphasis on a communication strategy in the material presented to councillors last week.  Hopefully this isn’t code for a PR exercise where inconvenient information about the risks a community faces are downplayed and “massaged”.  One of the key demands of the Extinction Rebellion protest movement is to “tell the truth” about the climate crisis.

Here are a few slides taken from the presentations which gives a flavour of what is being proposed. 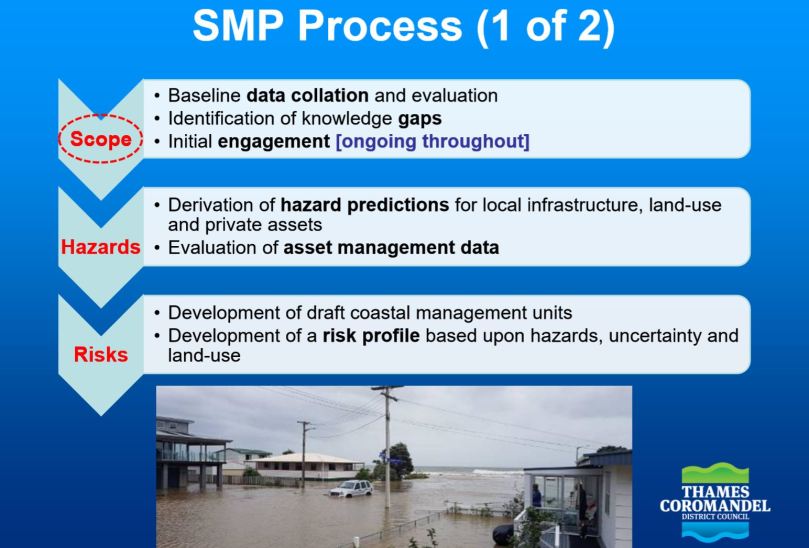 Keep an eye out for public notices in your community about the promised “community engagement”.  This will be our best opportunity  to actively engage with the Council and its consultants and make sure our voices are heard about the true extent of the climate risks and the emergency that we face in coming decades.

Footnote – Over 2 years ago in April 2017 I called on TCDC to get serious about planning for sea level rise and coastal hazards.  Here is what I said back then —

“Councils have failed to identify all coastal hazards on the Peninsula, including by inundation due to sea level rise.  This is legally required by Government directive.”

“there is no coherent policy to inform residents or the Councils themselves about many of these hazards, or to determine when District-wide ratepayer funds should be spent.”

“no has consideration been given how potentially massive future costs will be funded or even afforded when erosion and inundation flooding occurs around much of the Coromandel coastline.”