A new research paper published by the Deep South Challenge has highlighted a further layer of complexity and difficulty for central and local government relating to climate change adaptation – how will the Crown’s obligations under Te Tiriti o Waitangi be fulfilled?

The Crown has a duty to actively protect Māori lands, estates, forests, fisheries and other taonga.  The paper assesses what Treaty duties may exist in relation to decisions to adopt measures to adapt to hazards associated with sea-level rise.

Significant number of Māori communities in low lying areas of New Zealand, highly vulnerable to sea-level rise and other climatic events such as storms and floods. Māori have strong cultural and spiritual ties to lands, waters and ecosystems so damage to ancestral territories will impact the wellbeing of local community 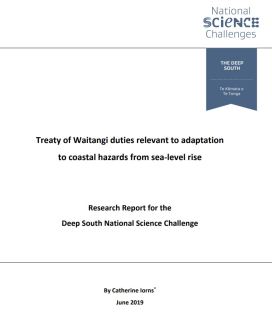 The paper emphasises that the Crown must not create policies and laws that undermine the ability of iwi to protect the land.  For climate adaptation this presents a conundrum because while the duty is on the Crown most of the decisions relating to adaptation are made by local and regional government under the RMA.  While local government actions may breach the Treaty guarantees, any claim will be against the Crown.

A further obligation has arisen from the Rena court decision which confirmed that Treaty requirements apply no matter what the process is, including those beyond the processes in the RMA.  Therefore, treaty duties require that Māori are involved in all if not most adaptation decision-making.

The paper recommends that this will require –

Where managed retreat needs to be discussed, especially from ancestral lands, there would have to be truly joint decision-making. Relationships with traditional territories would still need to be maintained even in the absence of ownership. For that, access to those coastal territories is needed. Māori may also require some form of assistance if they are to relocate away from sites of ancestral significance.

For local government, the paper recommends the establishment of procedures and structures for good faith cooperation in decision-making between Māori and relevant councils. Such systems need to go beyond the minimum requirements of the RMA and utilise more of the optional methods of cooperation and decision-making that implement best practice.

All decision making, even including any retreat from coastal lands, must be undertaken in a manner that genuinely attempts to ensure that Māori do not lose ties to ancestral lands and can maintain their relationships with the coastal environment, while recognising their authority to preferably control but at least share in making decisions over those assets.

The Kaiaua Community Coastal planning project will have genuine iwi representation and partnership at both the governance level on the Joint Working Party, as well as on the Community Panels.  It will be interesting to see what provision is made for genuinely iwi partnership relating to TCDC’s Shoreline Management Plan Project.

For an overview of this paper on the Treaty and other Deep South Challenge recent research publications, see this excellent article by Eloise Gibson in Newsroom, and this Stuff article on the Treaty and climate change generally.